I had hoped to go through the Bath locks and onto the Avon down to Bristol but the forecast for river levels was not good so I made do with walking down to the Avon.  It looks pretty peaceful but it can rise very quickly.

Two locks were combined when the canal was restored in 1976. A road constructed while the canal was in a state of disrepair passes over the original site of the lower lock. The new chamber has a depth of 19 ft 5 in, making it Britain's second deepest canal lock, second only to Tuel Lane Lock on the Rochdale, just deeper at 19 ft  8½ in. 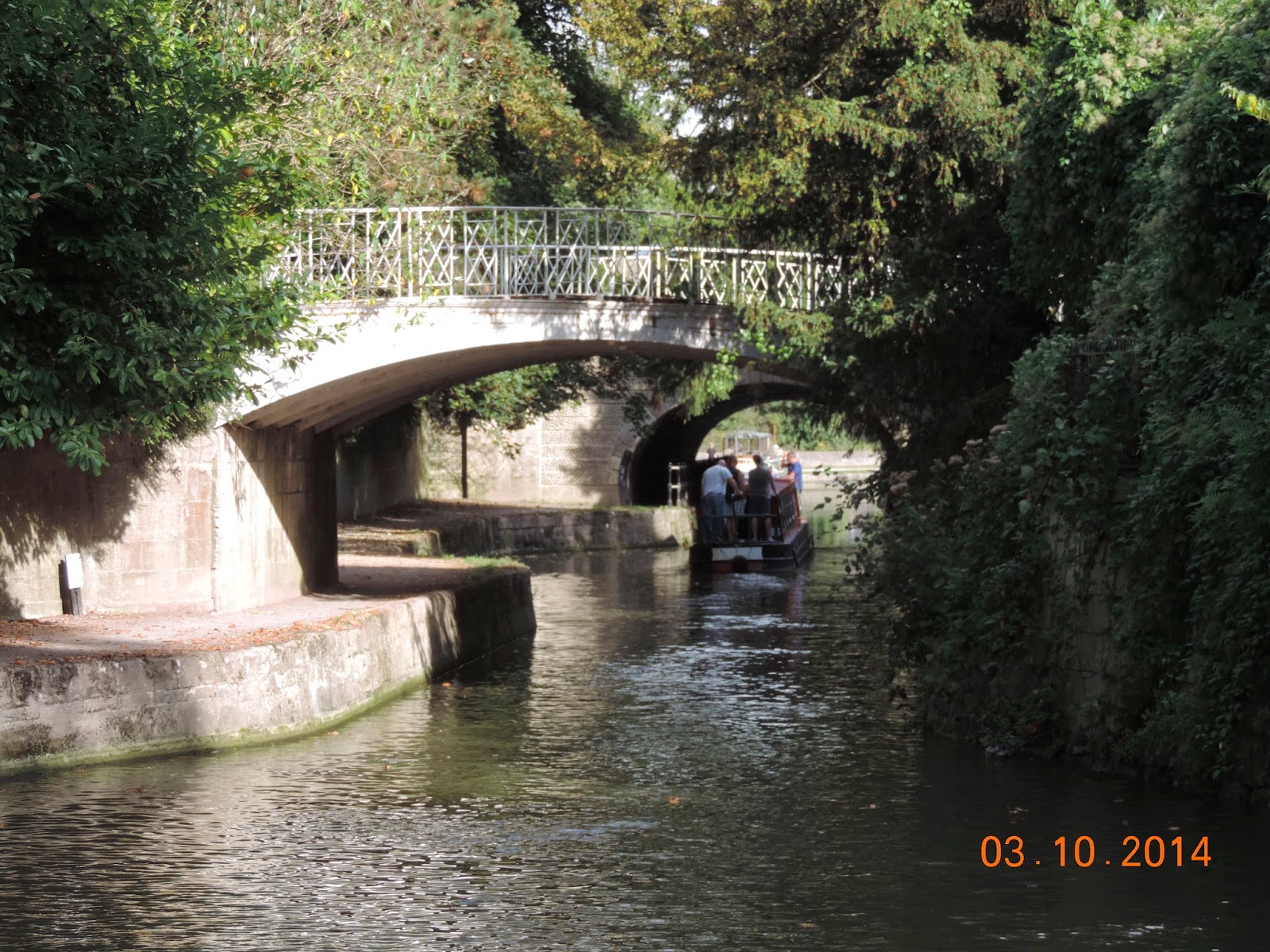 Above the top lock the canal passes through Sydney Gardens where it passes through two tunnels and under two cast iron footbridges dating from 1800. Cleveland tunnel is 173 ft long and runs under Cleveland House, the former headquarters of the Kennet and Avon Canal Company. A trap-door in the tunnel roof was employed to exchange paperwork between clerks above and barges below. This is now a grade II listed building 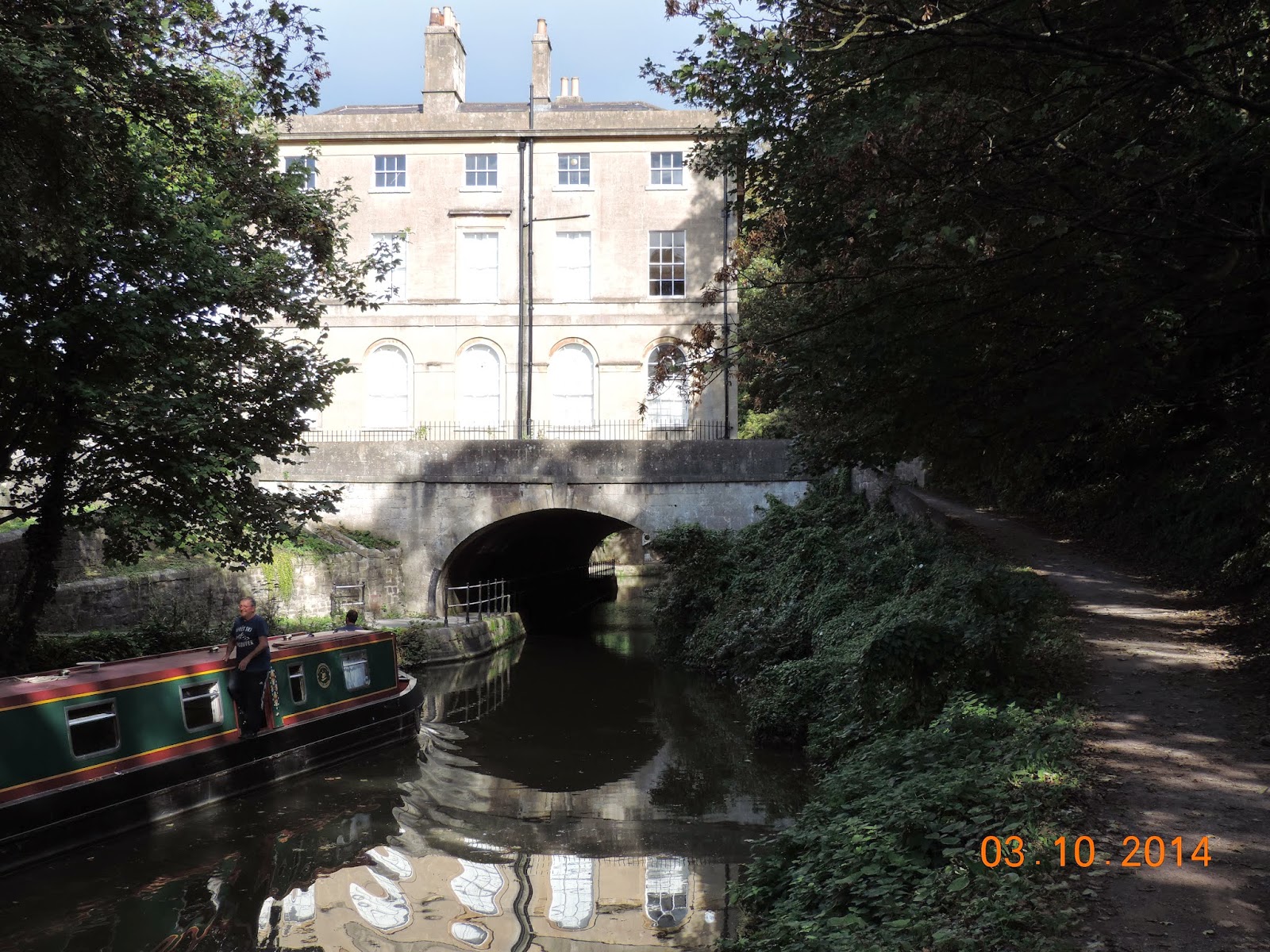 After a night at Bradford, where I manage one of the boater's breakfasts which I missed out on when coming down, I moor up and discover what is to become my favourite mooring on the K&A. 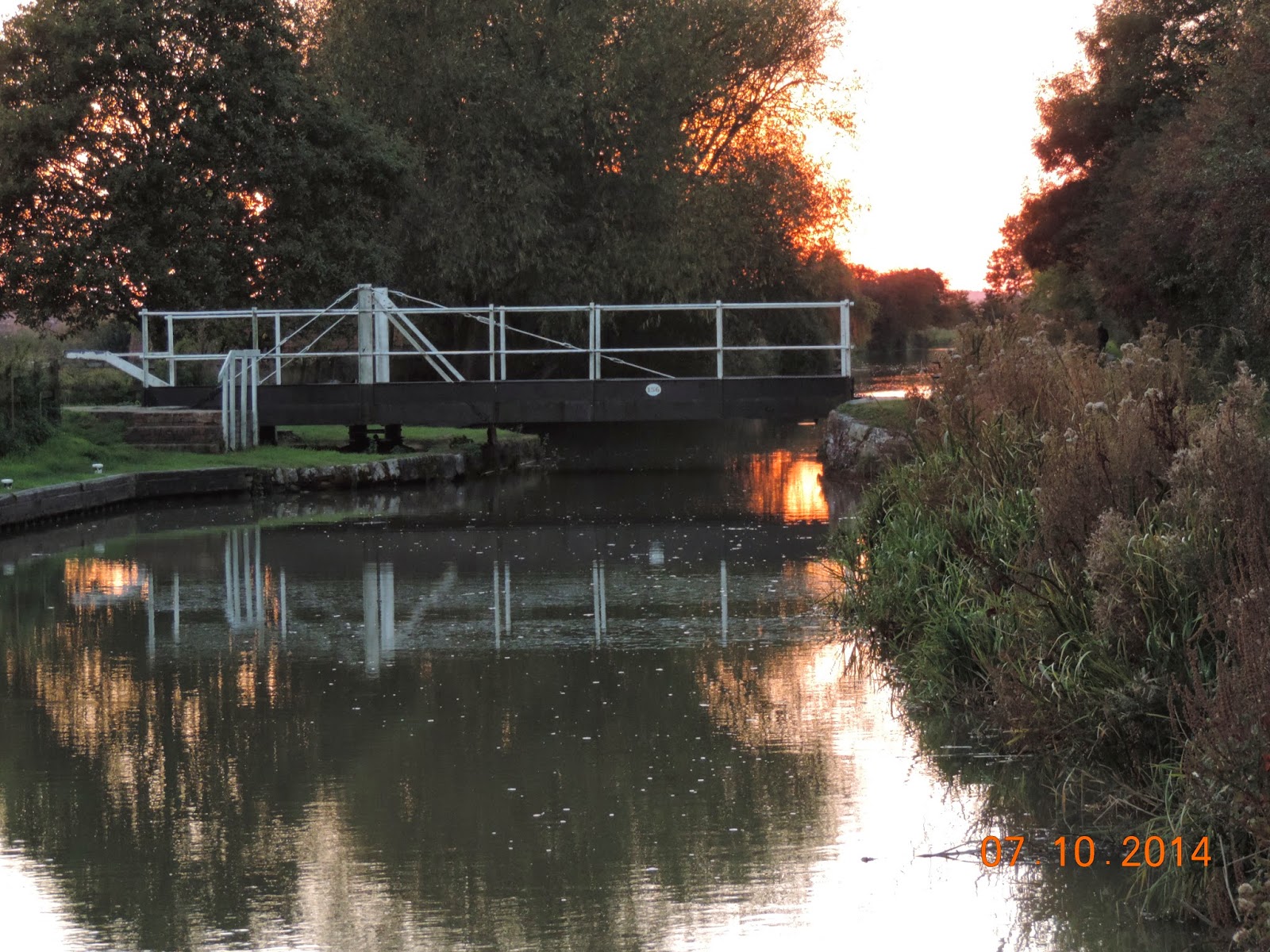 After staying over a week I remember to take some photos before leaving. 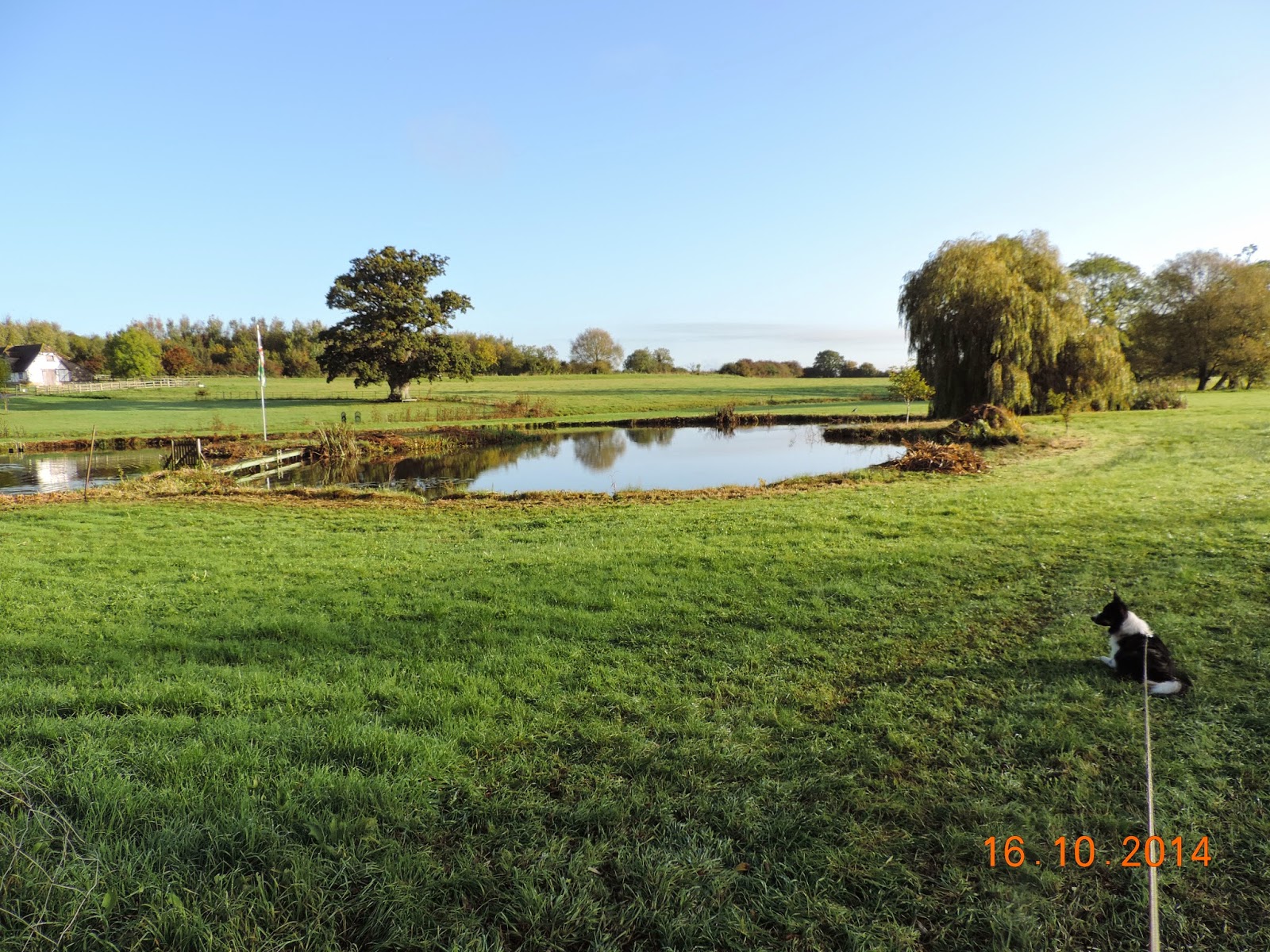 The owner may be a trifle eccentric but he encourages walkers and Scout camps - James particularly enjoys the woods and many fields.


So, that was cruising over for another year.  Well, almost.  When I went back to winterise the boat it was a glorious Autumn day - I could not resist a final little outing.

End of september - towards Bath 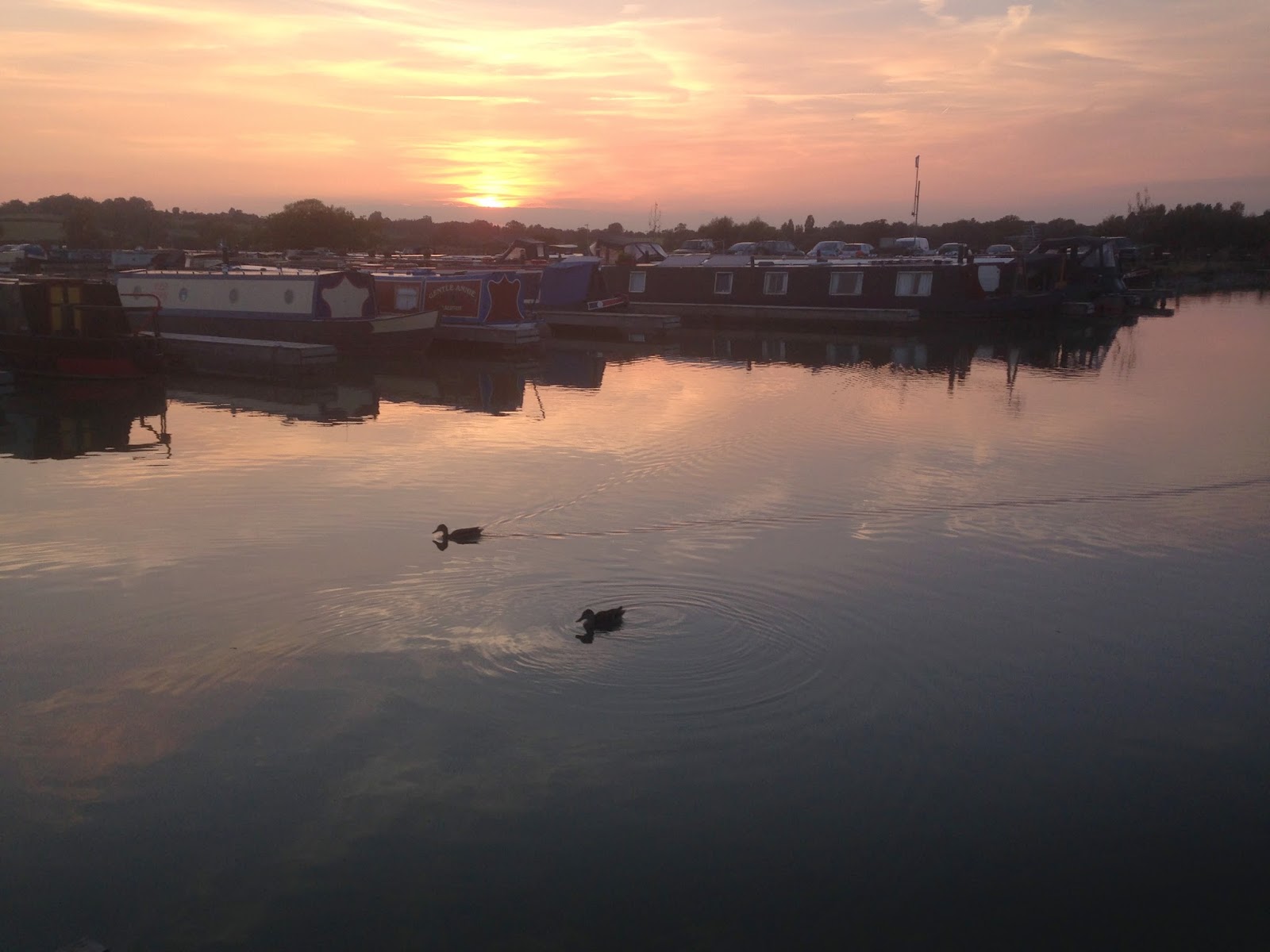 All was well at the house and I bring my car back to the marina on the 24th.  The lovely late summer weather continues and I enjoy sunset in the marina sitting out on the back deck.

I set out in very pleasant weather on the 26th and spend 3 nights in the bottom pound of the Seend flight.

I have arranged to meet up with a few people from the Livingonanarrowboat forum - Mike, his wife Ellen and friend Marion, all from Canada from the hotel boat Wessex Rose, Tim & Jo from NB Albion and Norman from NB Teal.  A very pleasant evening and excellent food at the Somerset Arms in Semmington - unfortunately no-one took any photos!  It is a 24 hour mooring so I set off for Bradford-On-Avon on the 30th.


I had intended to moor at Bradford but the visitor moorings are pretty full so I continue and am pleasantly surprised to see a lock-keeper and volunteers at Bradford lock. 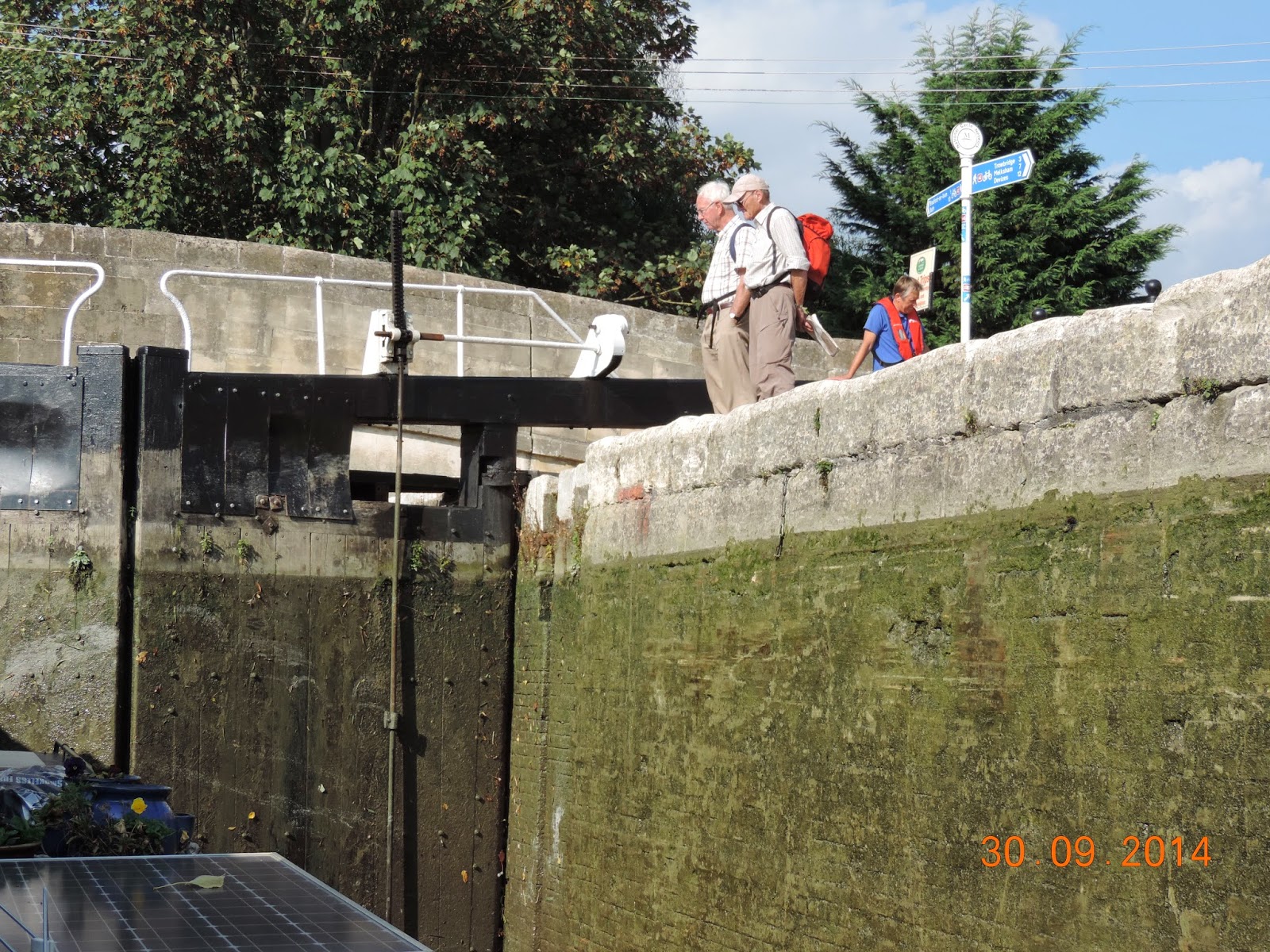 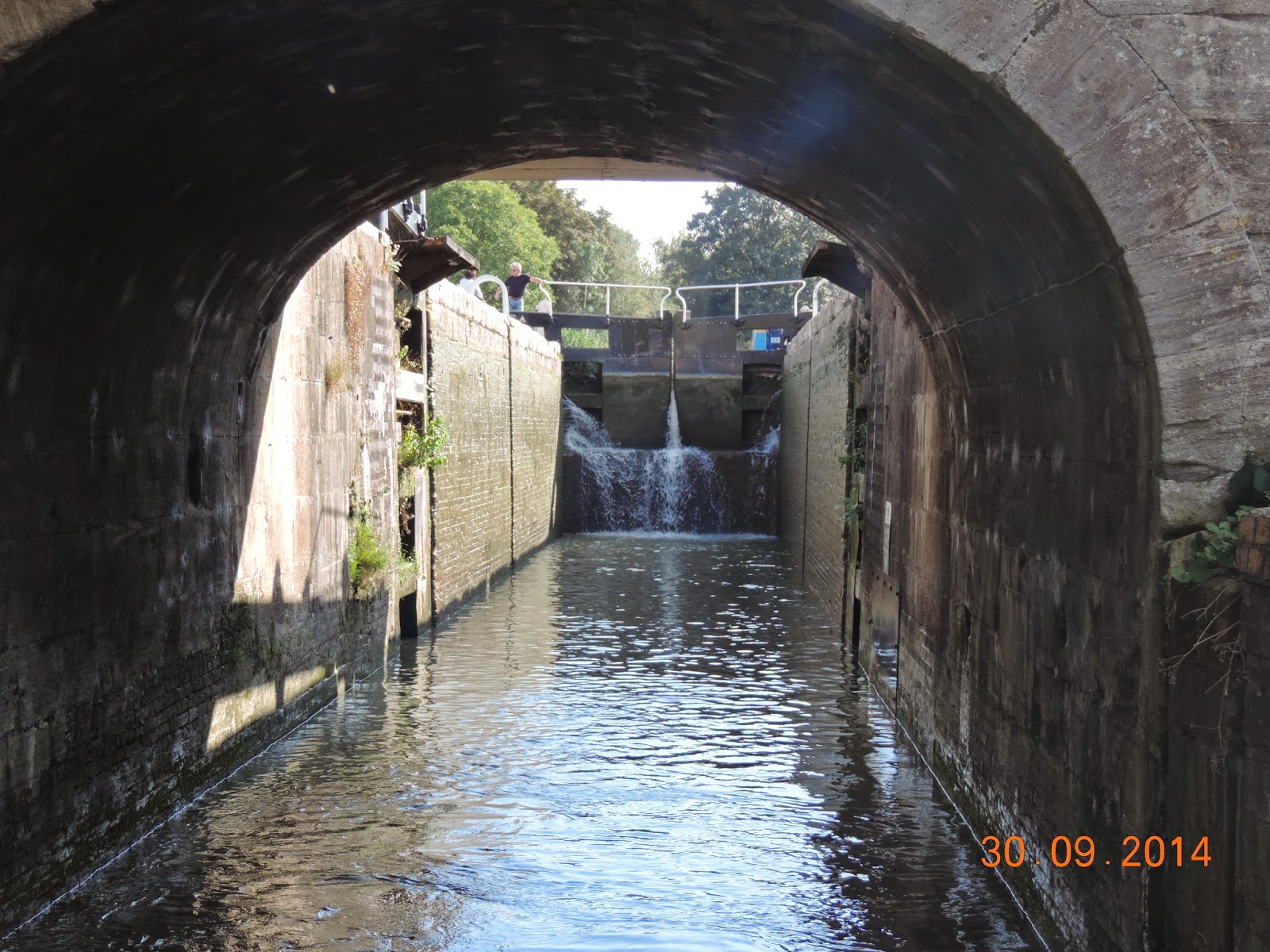 At over 10 ft deep it would not be a problem to work on my own but avoiding climbing down the ladder is always a bonus! 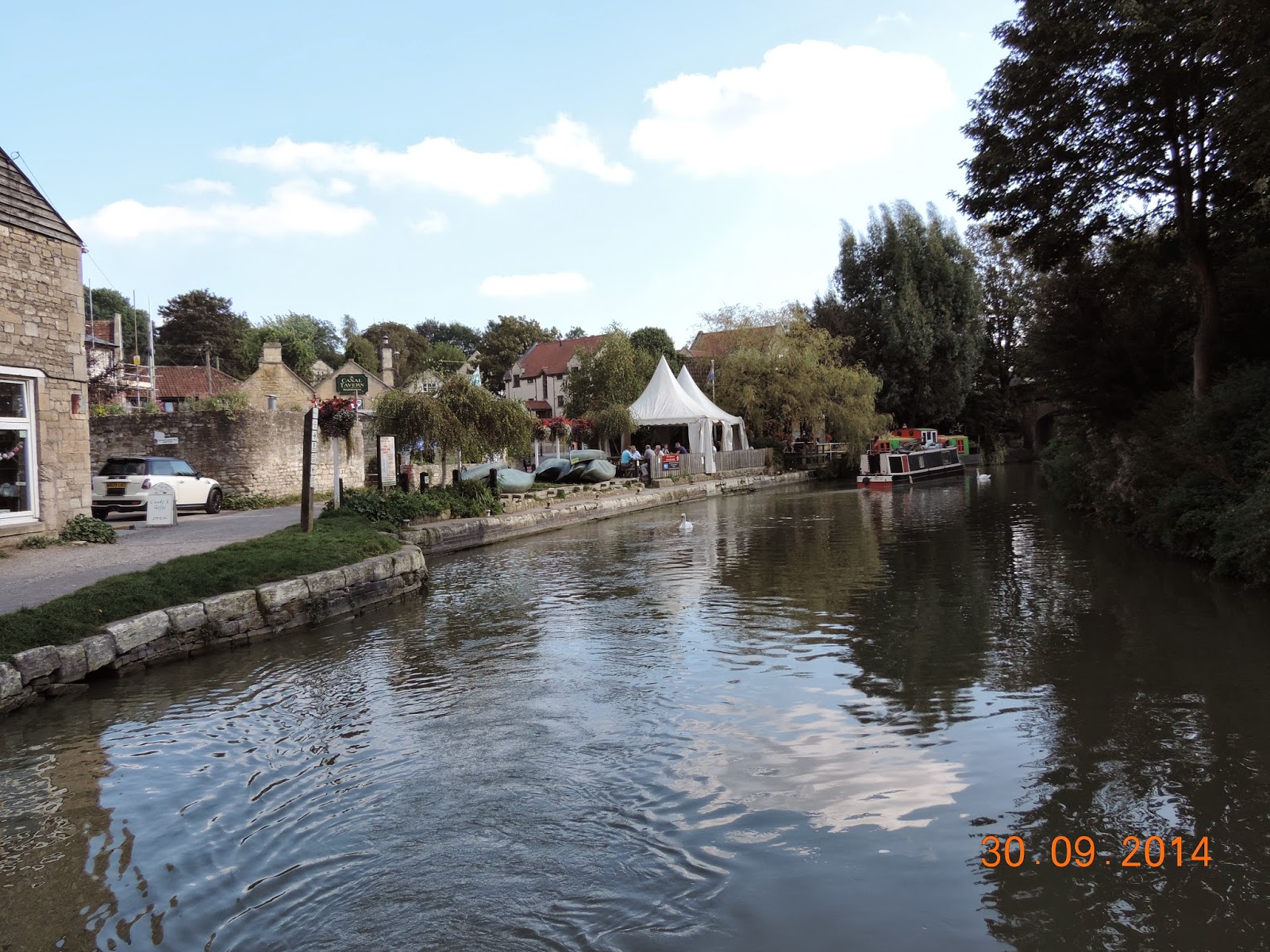 The lock landing stage, below the lock and next to the Lock Inn Cafe which serves a "Boatman's Breakfast", which I had hoped to partake off - unfortunately not this time!
Almost like a miniature Bath, Bradford was a prosperous weaving centre and at one time had no less than 30 water-powered cloth factories. 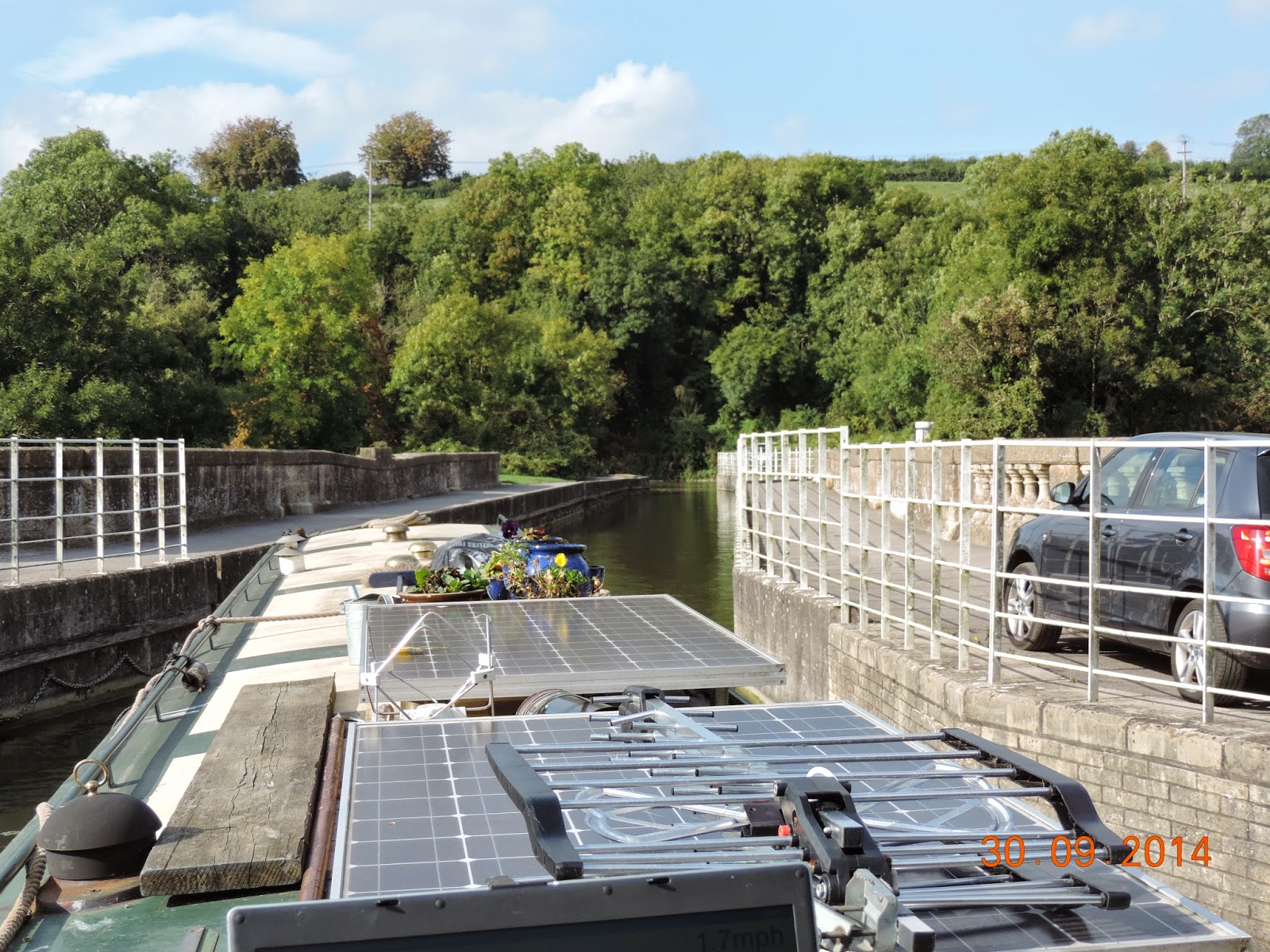 I soon reach the Avoncliffe Aqueduct, built by John Rennie in 1801 and taking the canal over the river.  It is 110m long and 10.4m wide and, as part of the restoration of the canal, the aqueduct was lined with a concrete "cradle" and made water-tight in 1980.

A long wooded section follows, with the canal following the river along the side of the valley, before arriving at the Dundas aqueduct (named after the first chairman of the K&A) to re-cross the Avon and the railway, which is a constant companion from Bradford to Bath.

Completed in 1804 the aqueduct, by Rennie again, it is 137m long, Grade 1 listed and a scheduled ancient monument.  Over many years leaks had developed and it was closed in 1954. For a while in the 1960s and 1970s, the canal was dry and it was possible to walk along the bed on each side of the river as well as through the aqueduct itself. The aqueduct was relined, with polythene and concrete and restored, reopening in 1984 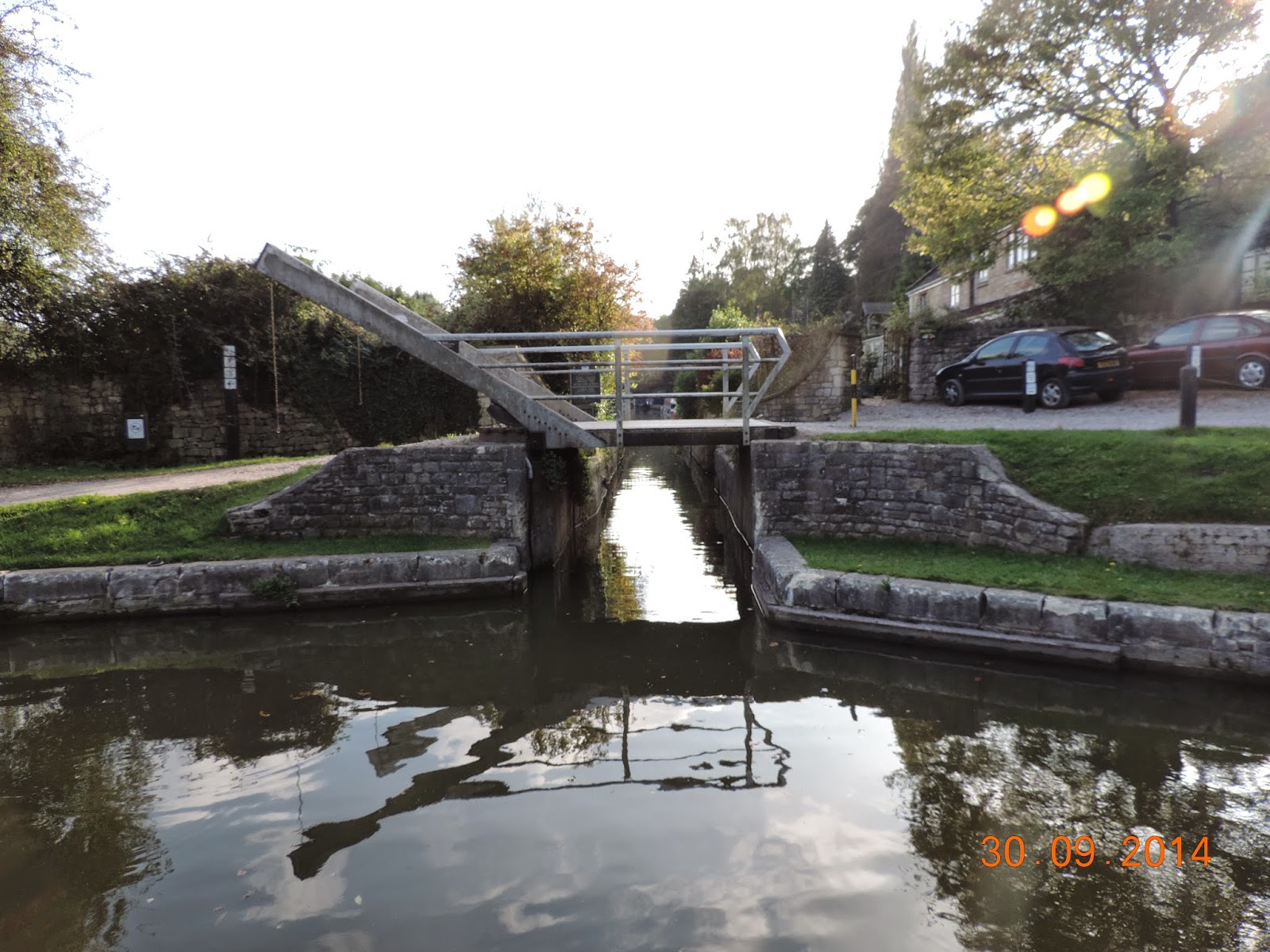 The Somerset Coal Canal adds a delightful distraction.  Originally a very profitable canal, providing a means of transport for the coal from the Somerset mines, and feeding traffic to the Kennet & Avon and Wilts & Berks canals from 1805.  Only a very small portion of it now remains in water, at its junction with the Kennet & Avon Canal, where it is used as private moorings.  It incorporates a cafe/restaurant and several pleasant walks.  It remained very profitable until the arrival of the railways in the late 19th century. 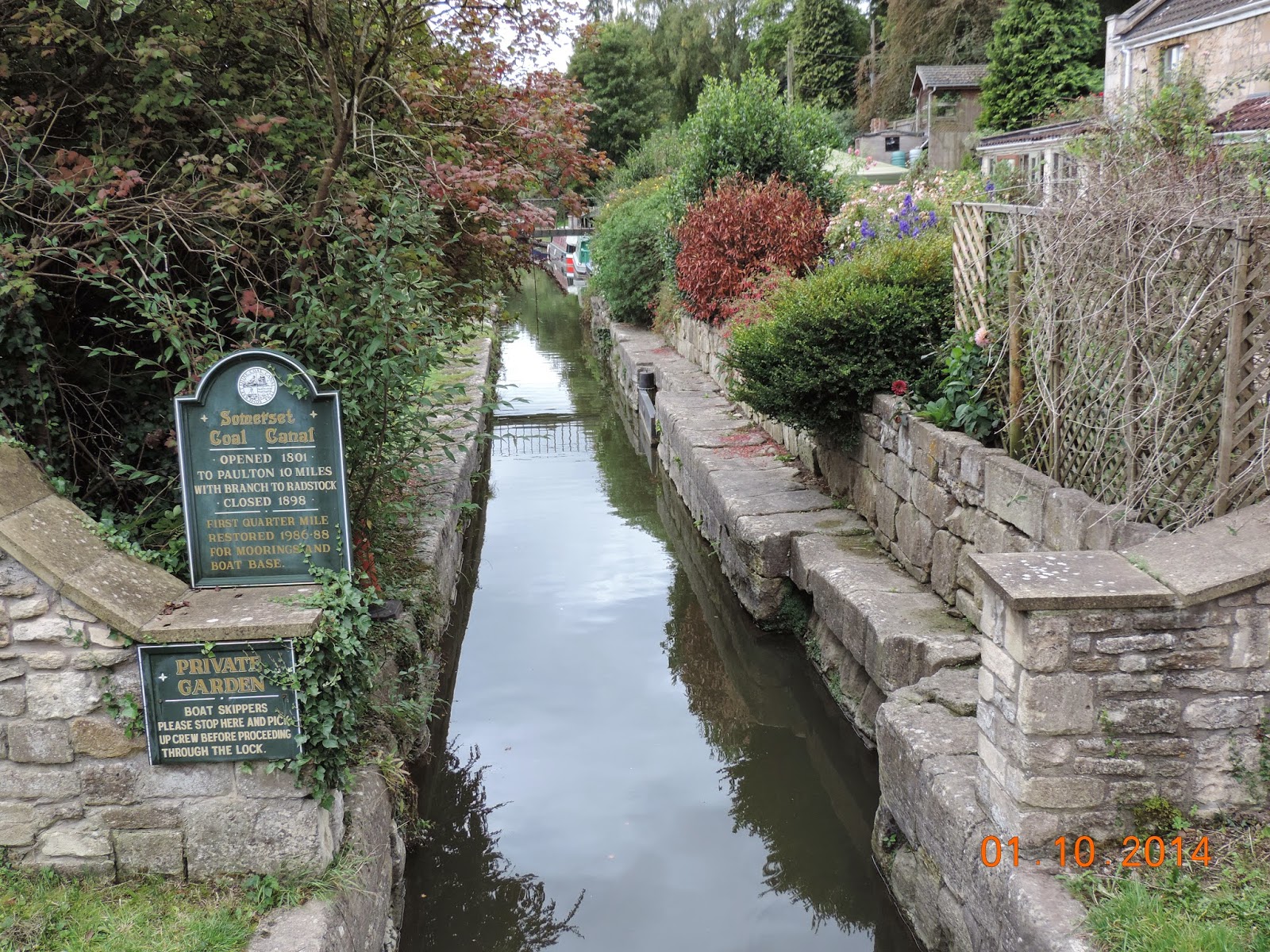 The canal is currently being restored and it is hoped it may one day be fully re-opened.

September and into Caen Hill Marina

I haven't moved since my last post - partly because it is a great location and partly because it looks like the fantastic late summer has come to an end and we are now getting winds and rain, so not inclined to move.
It means I have time to record my September meanderings.  I am booked into Caen Hill Marina for the winter and intend to get there by mid/late September to let me spend a few days back at the house and fulfill the insurance company's requirement for me to "live" in the property at least every 60 days.  First, I have more than a few locks and some lovely countryside to negotiate.
I spend a few days covering the section I have previously travelled down to Froud's Bridge Marina then spend a couple of nights in Newbury:

This used to be the terminus of the Kennet Navigation from Reading, before the K&A canal construction to Bath. 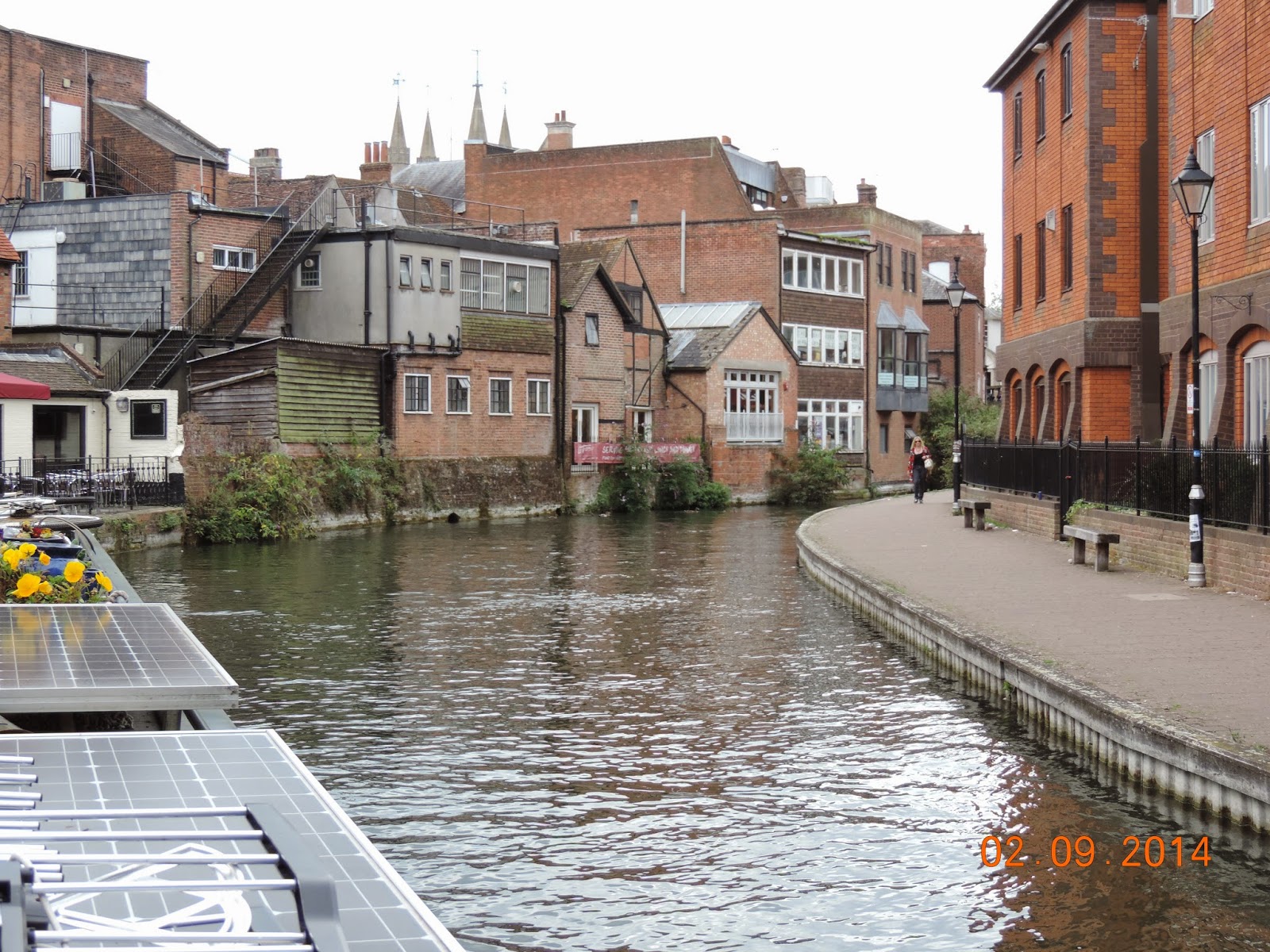 The river is comparatively quite narrow going through the town. 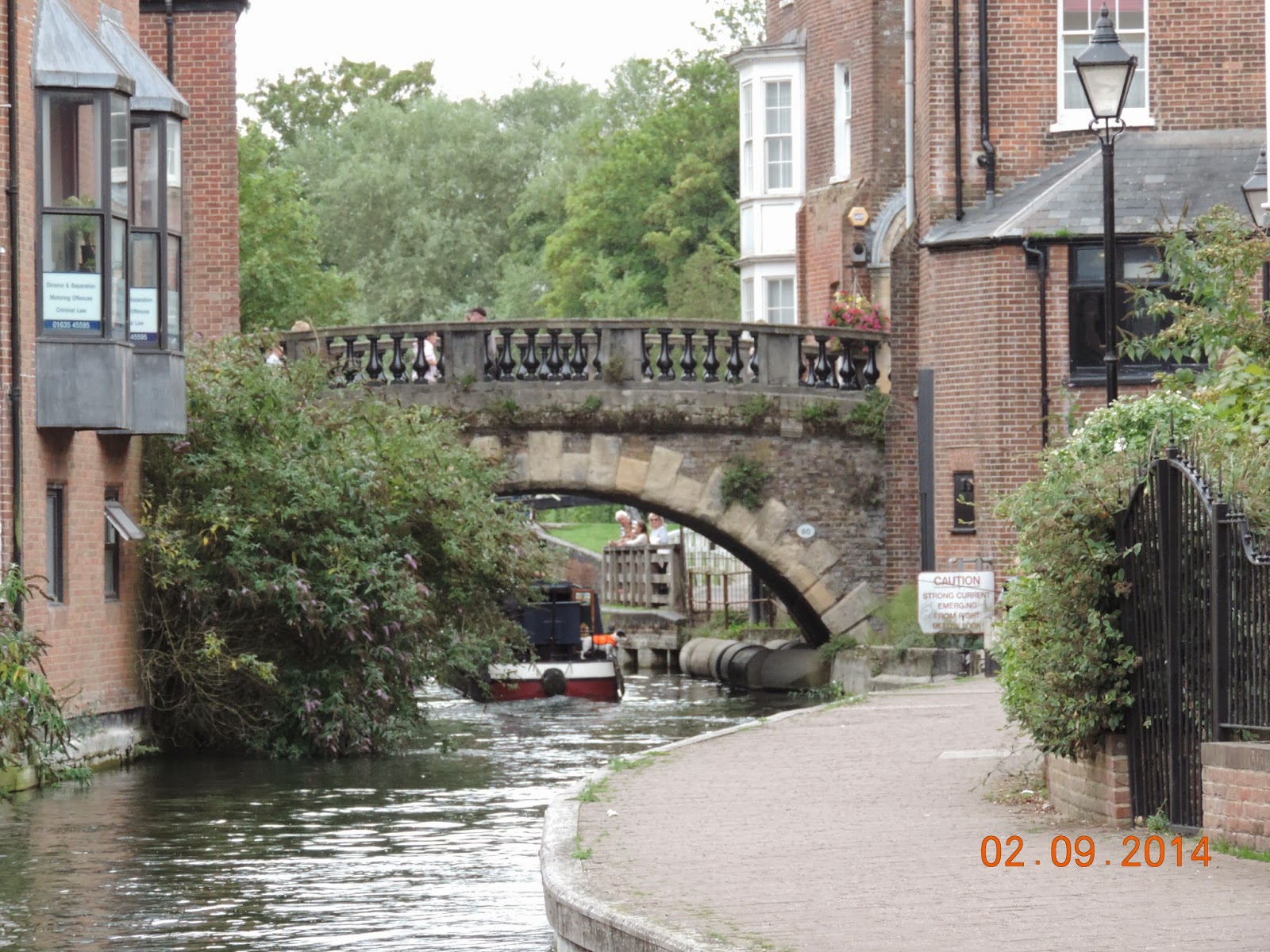 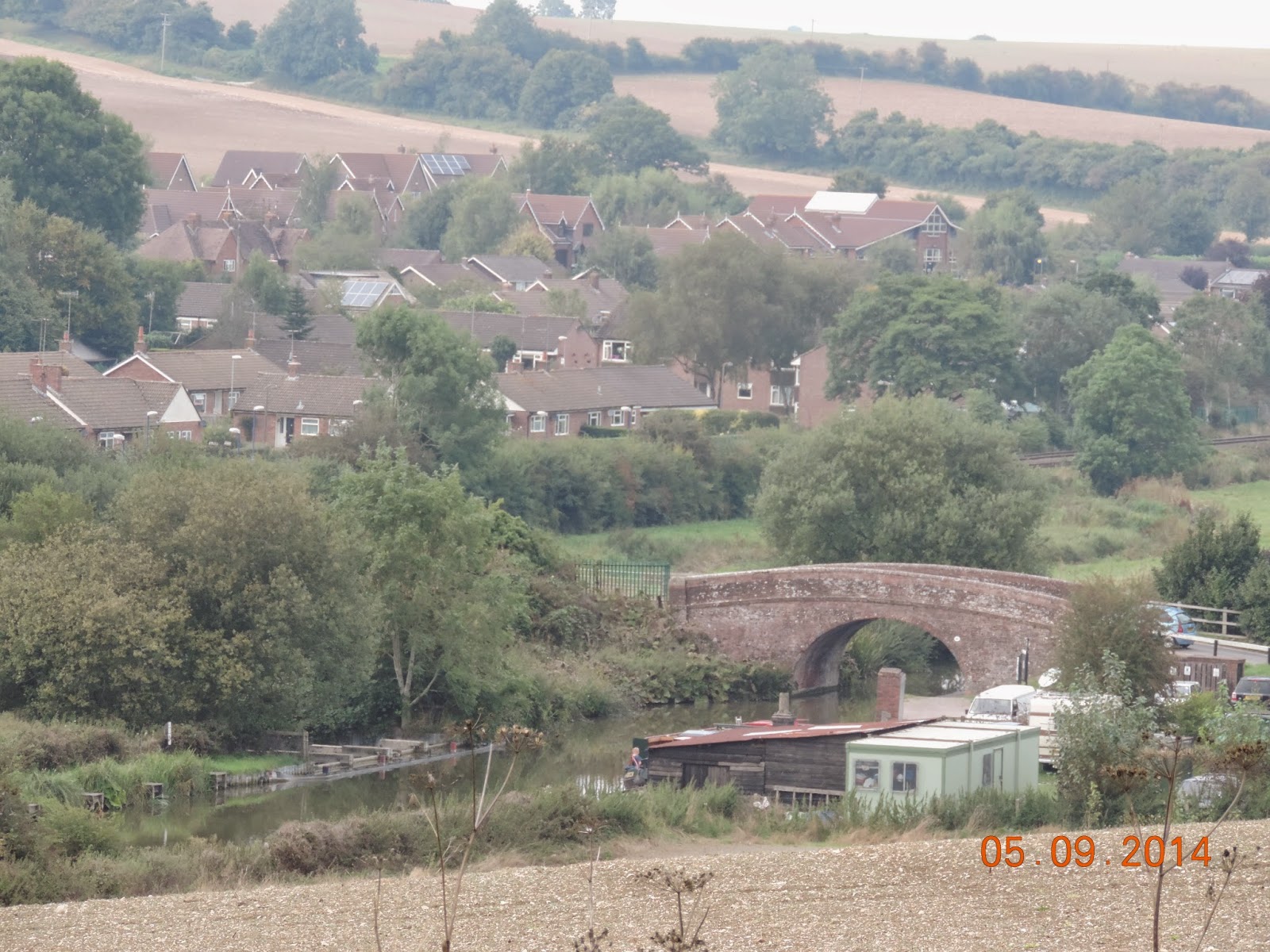 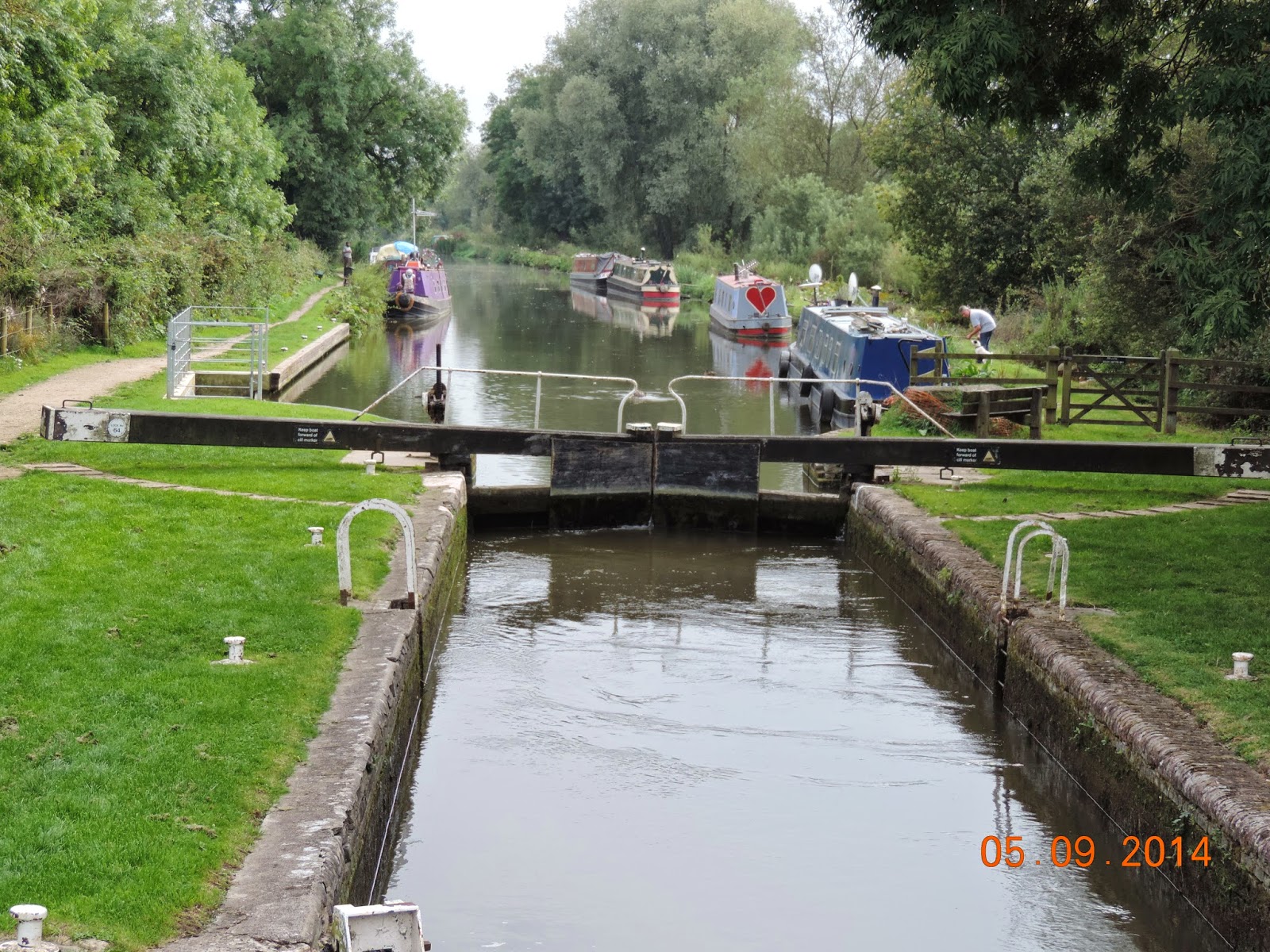 Couldn't resist this photo of a boat moored near me - no prizes for guessing who they are looking at. 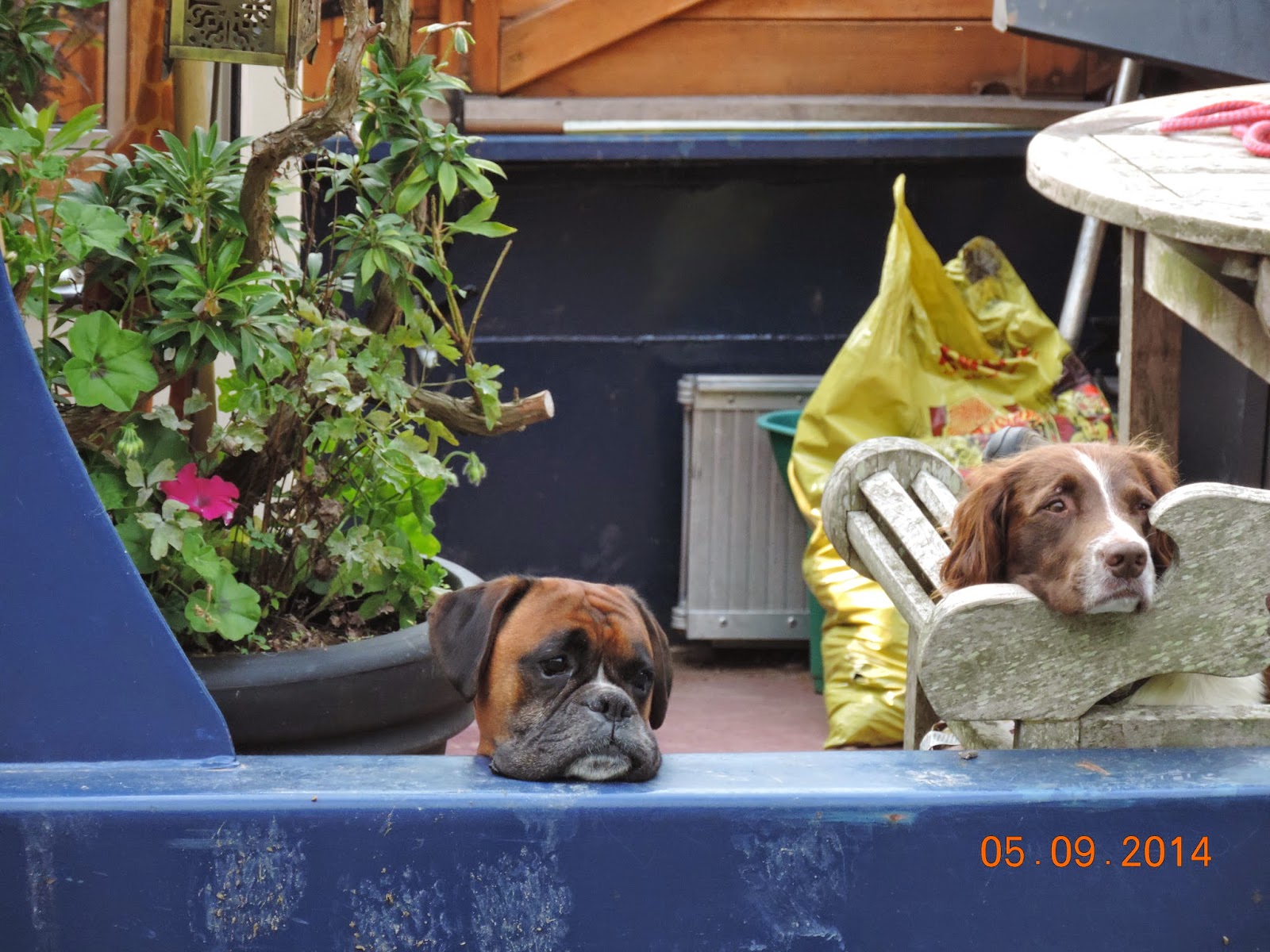 I am lucky to find a good mooring at Crofton for a visit to the pumping station. 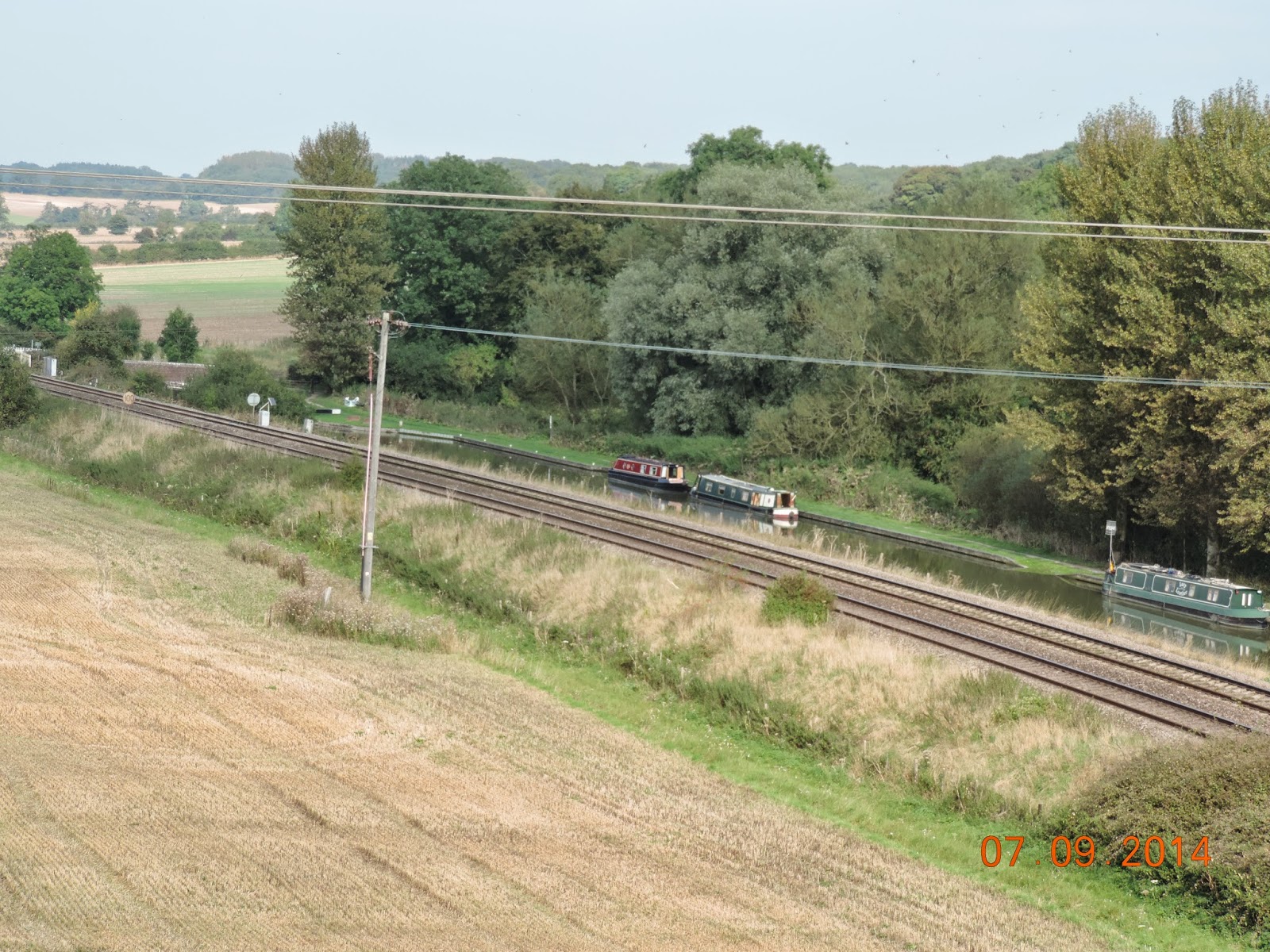 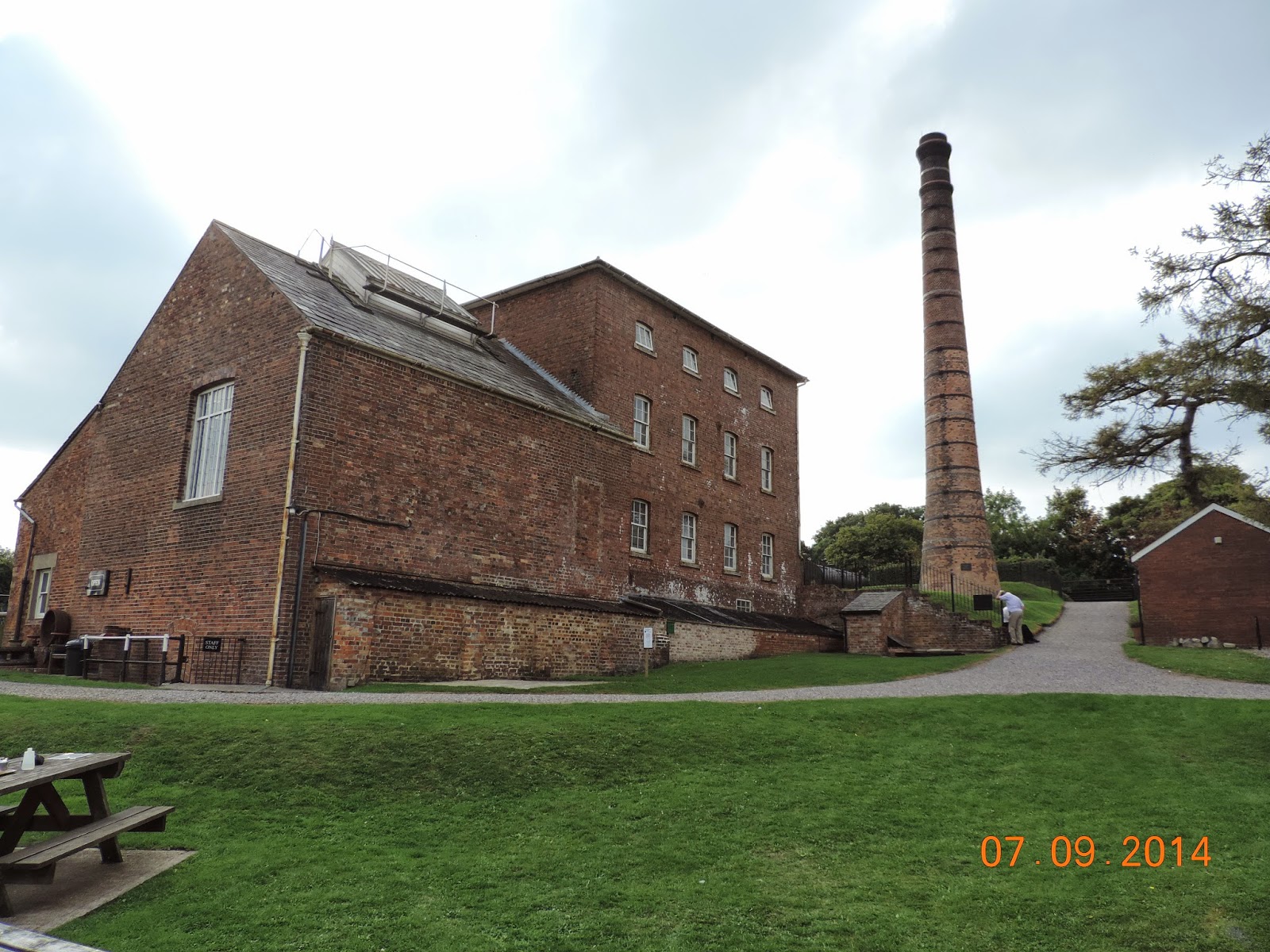 The first design of the Kennet & Avon canal by the distinguished Scottish civil engineer, John Rennie, called for a 4.5 km (2.5 mile) tunnel between the Wiltshire villages of Crofton and Burbage but, in those days, tunnelling was a very expensive and uncertain process and a cheaper alternative was sought. This involved raising the summit level of the canal and constructing a much shorter tunnel. However, this new summit was 12 m (40 ft) higher than any reliable local, natural water source and so a pumping station was needed at Crofton to keep it topped-up. It was estimated that this scheme saved £41,000 (equivalent these days to about to about £8,000,000) in the cost of canal construction, a very substantial saving.
Crofton Pumping Station was built in 1807 and started work soon after. The first engine installed in the building was a 0.9 m (36 inch) bore Boulton and Watt which had a wooden beam and began working in 1809. In 1812, a 1.06 m (42 inch) bore Boulton and Watt engine was installed beside it. In 1846, the 0.9 m bore Boulton and Watt was replaced by a Sims Combined Cylinders Engine constructed by Harvey of Hayle.

Lancashire Boilers are related to, and derived from, the Cornish boiler in that they have tubular metal furnaces passing through a horizontal cylindrical water space with external multiple pass flues. However they differ from Cornish boilers in that they have an additional furnace tube, a different gas path and they are much larger. Crofton uses a Lancashire boiler, and has a spare shell on site held for the future. Both of these boilers are some 2.3 m (7½ ft) in diameter and 8.5 m (28 ft) long and weigh about 22 tonnes. They have a working water capacity of some 18,000 litres (4,000 gallons/18 tons). These dimensions are typical for boilers of this type.

Both the 1812 Boulton and Watt, and the 1846 Harvey engine (in its final form) are in working condition, and are steamed publicly on several weekends through the summer months from a coal fired Lancashire boiler. When the Pumping Station is in steam, it actually carries out the job for which it was built as the electrically powered pumps, that now normally do the job, are switched off.  I would love to see it in action.

The pumping station is located 1¼ km (¾ mile) to the east of the summit. It raises the water to a level slightly above that of the summit, delivering it via a specially constructed feeder channel, called, from Cornish tin mine practice, a leat.

The Vale Of Pewsey, unfortunately a bit hazy, with the famous white horse - first cut in 1937 to commemorate the Coronation of George VI. 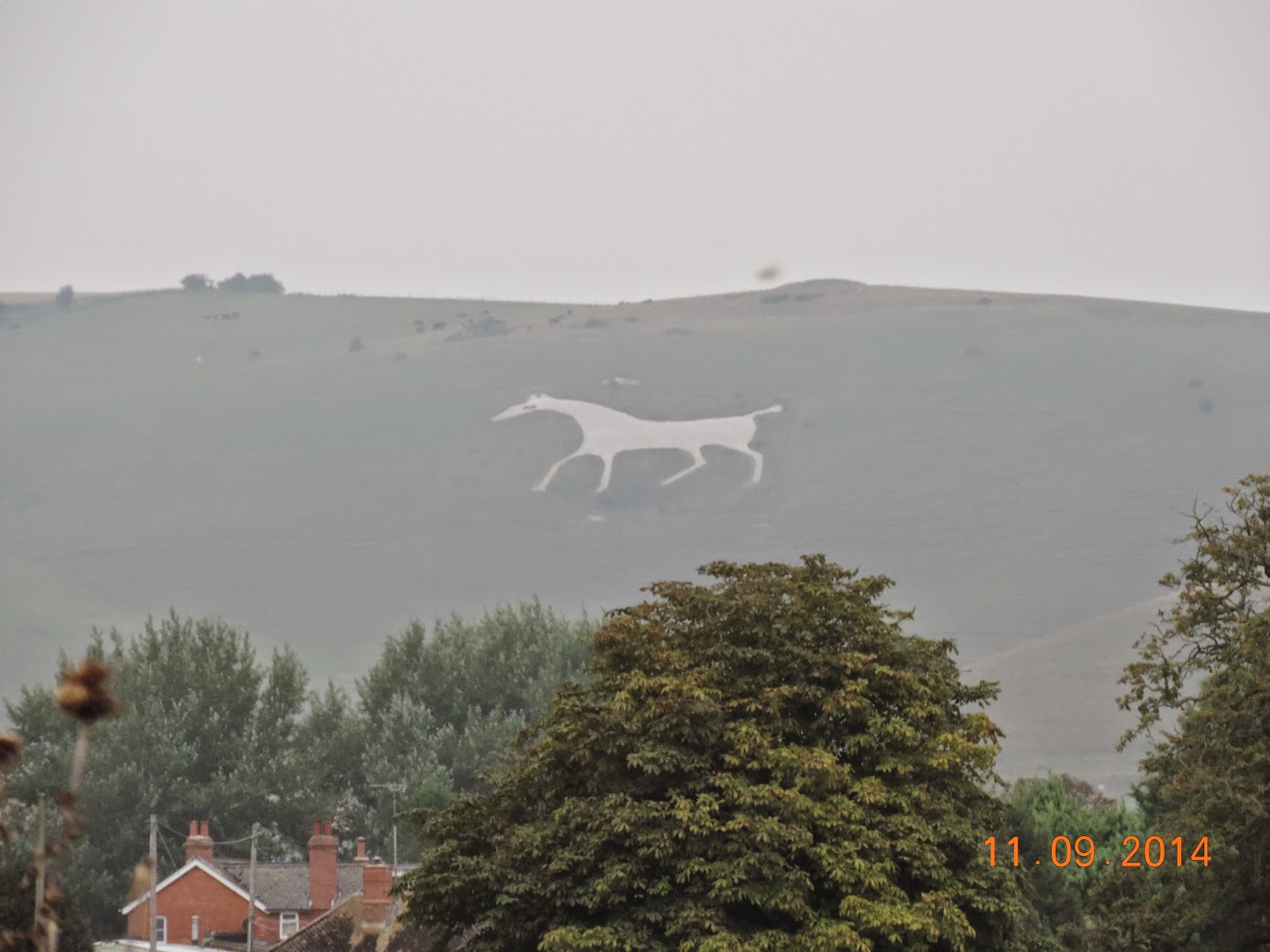 And so I arrive at Devizes, faced with 29 locks in 2.25 miles, including the famous 16 lock Caen Hill Flight.  By arrangement, I meet up with Jo and Tim on NB Albion, who have kindly offered to share the locks..  I walk down to the top of the Caen Hill flight with James and discover there is mooring for 2 boats immediately above the flight.  We take a chance and descend the 6 locks, meaning there will only be 23 on the morrow and are lucky to find both spaces unoccupied - not for long!

The flight is drained and locked at night and first passage is at 8am.  But that means all the locks would be set against us so we wait until about 10 in the hope that a few boats will be coming up.

And, fortunately there are boats coming up. 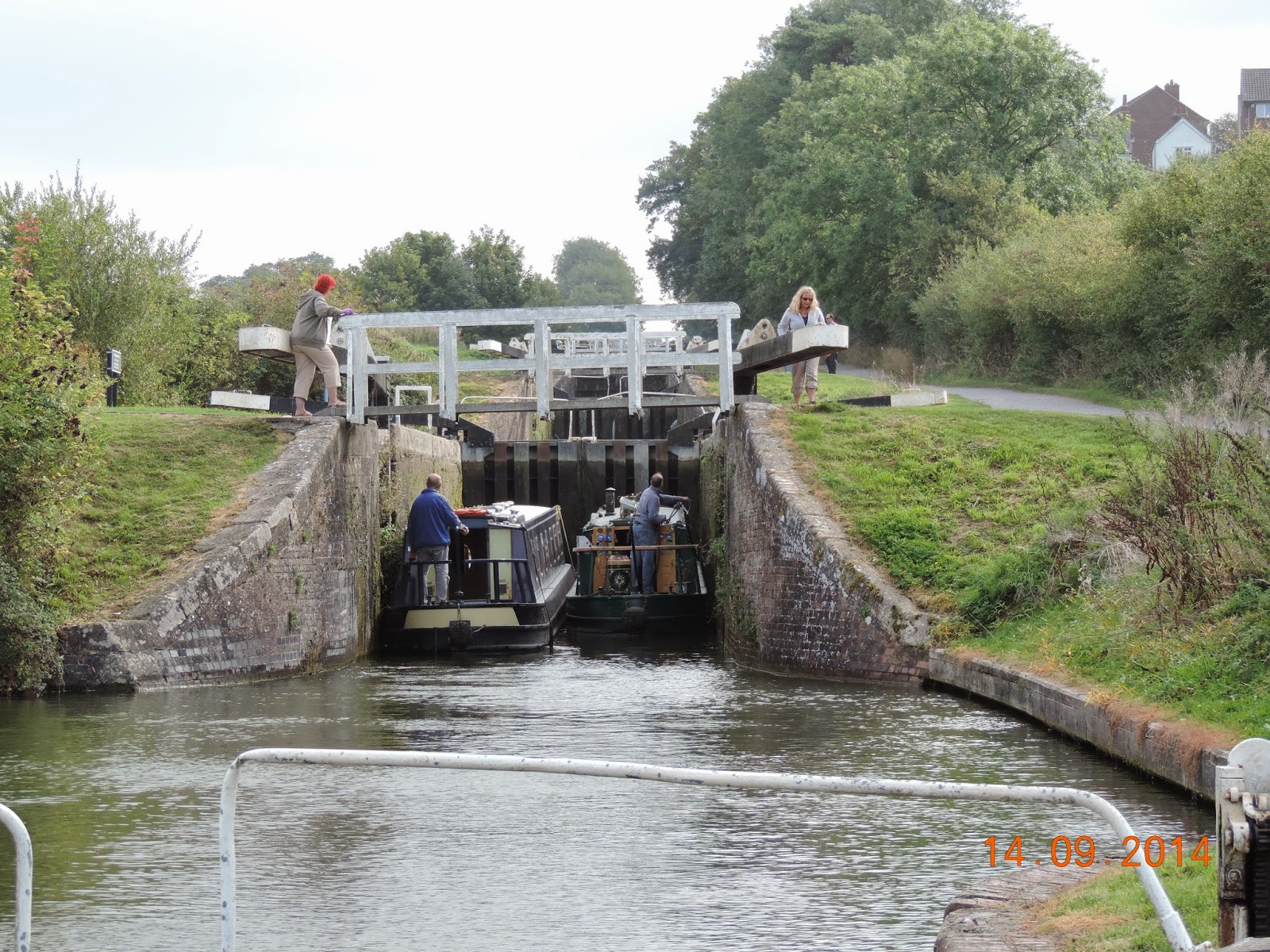 The whole flight is designated as a Scheduled Ancient Monument – the same level of heritage protection given to Stonehenge. 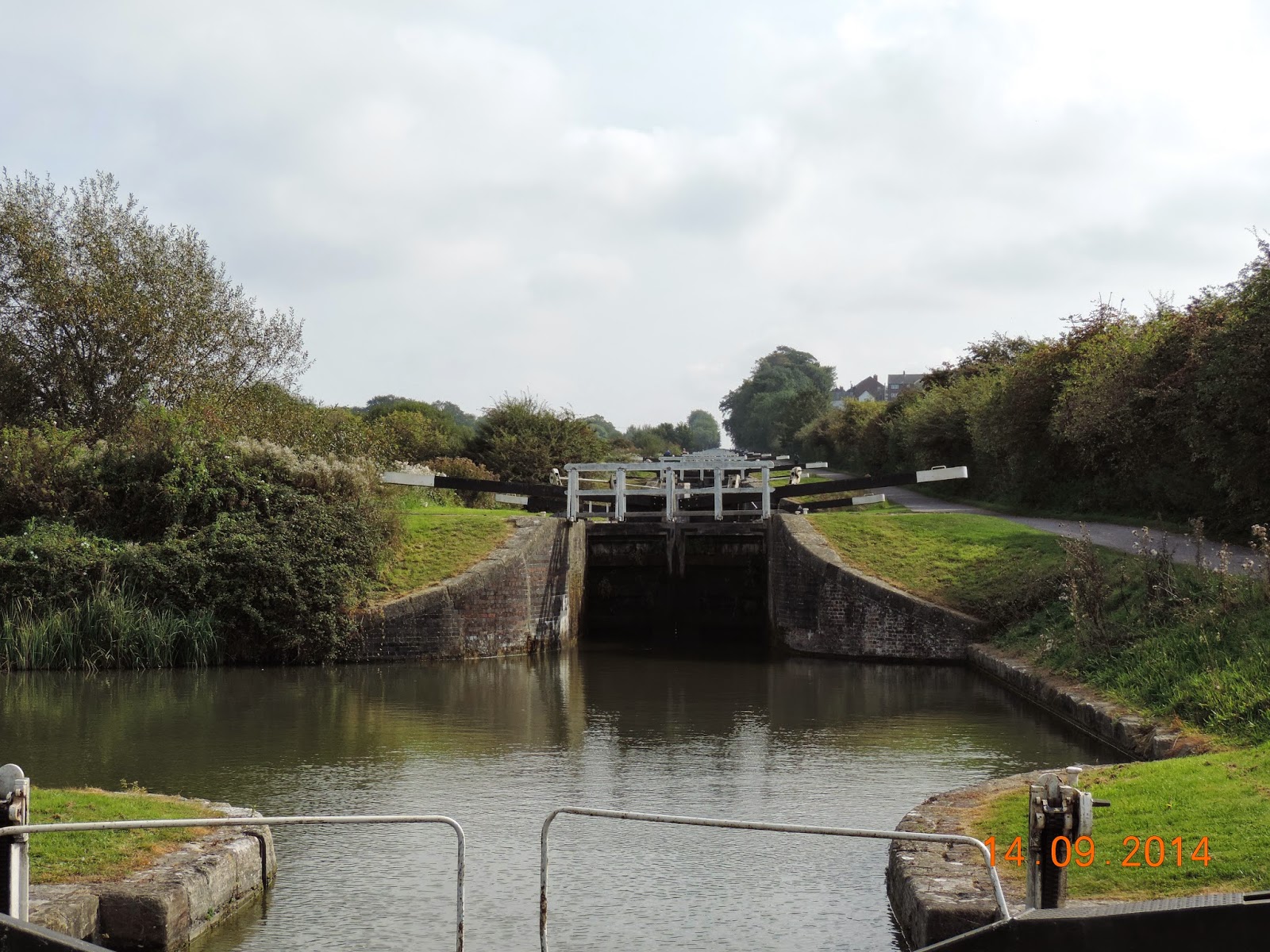 We travel most of the flight breasted up (tied together) meaning only one engine is used and, more importantly, only one steerer, leaving two people free to work the locks and set the next lock.  My first experience of steering two boats - thanks to Tim and Jo for trusting me with their boat! 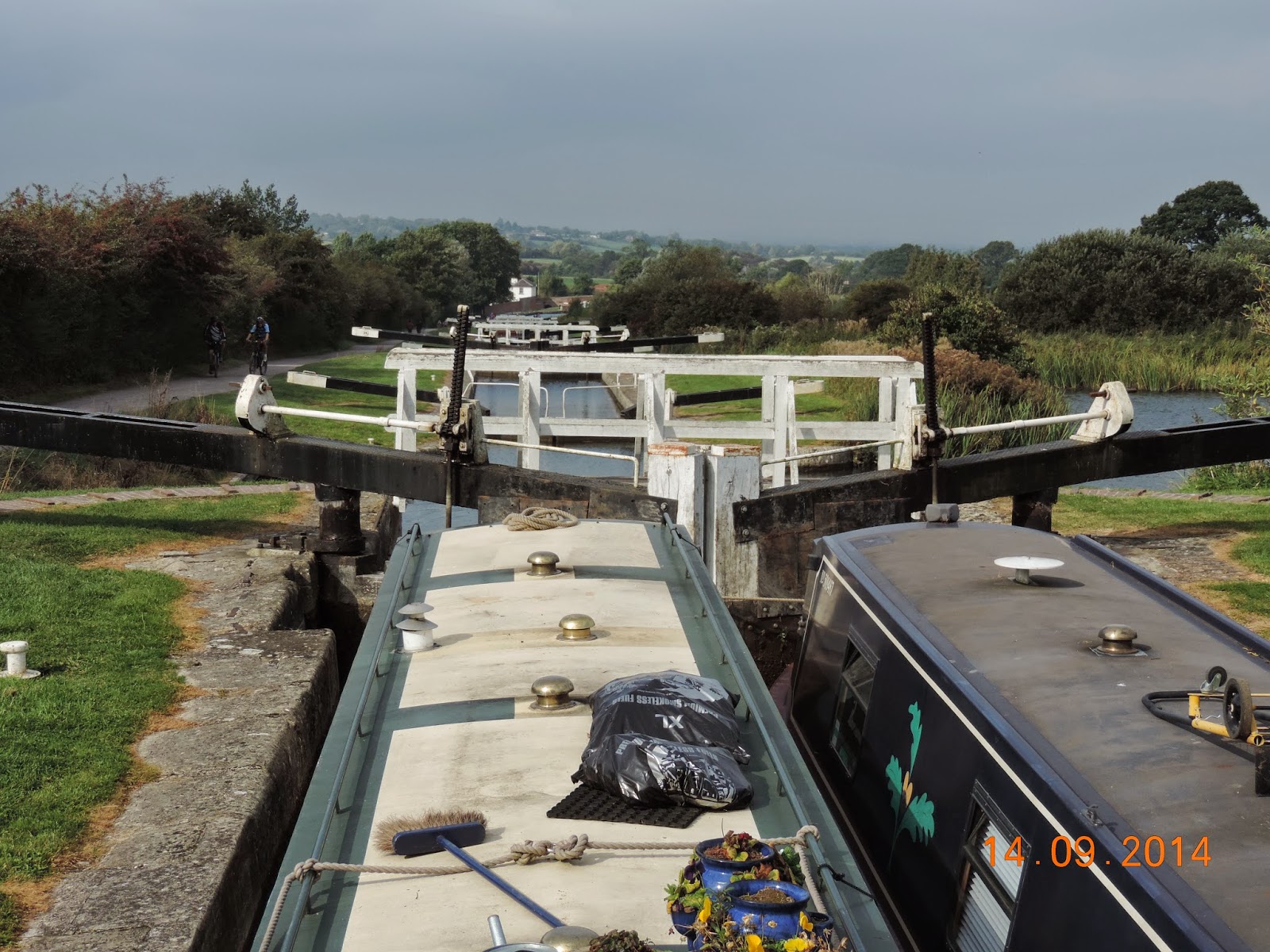 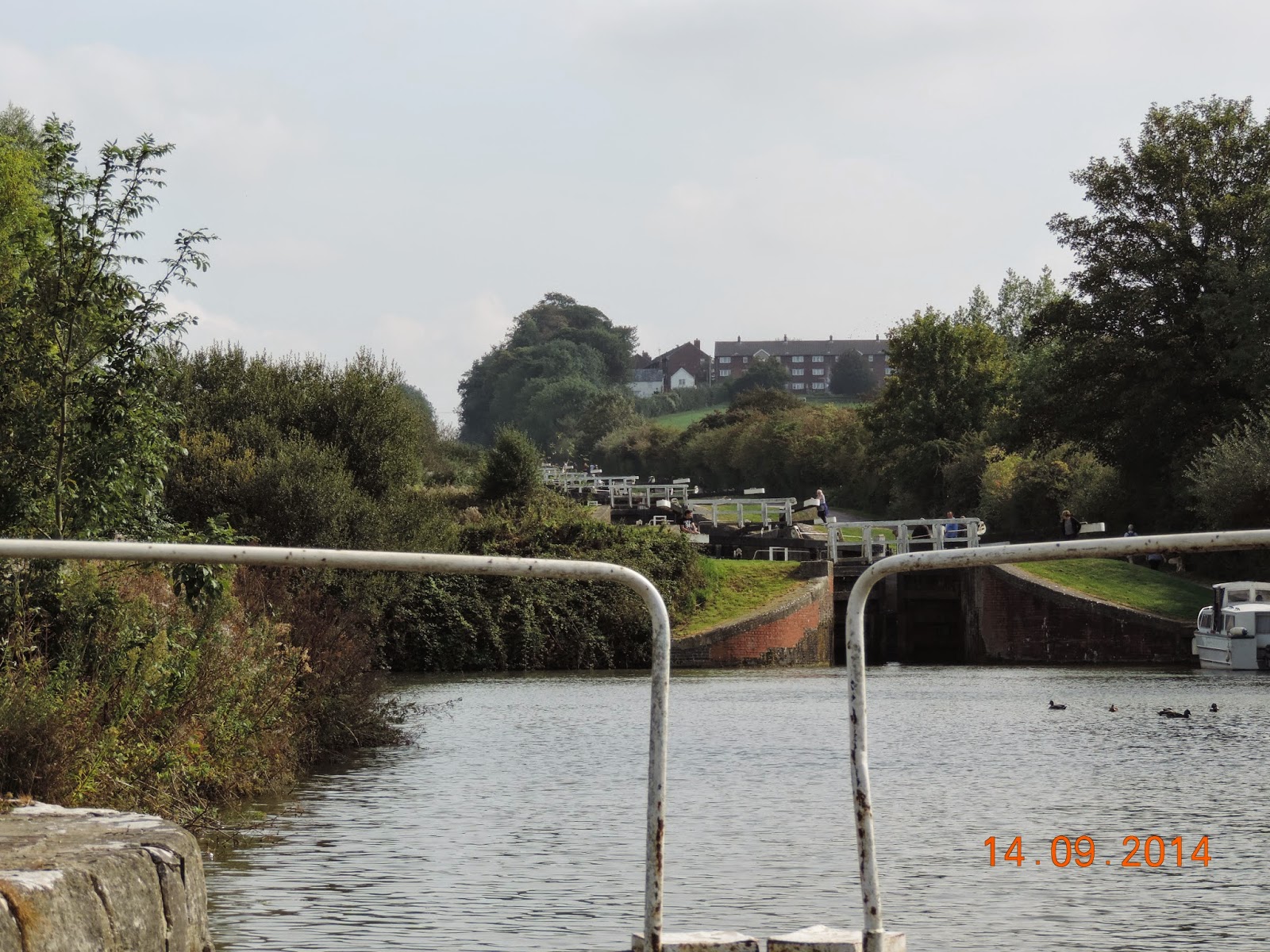 The end of the Caen Hill 16 - only 6 to go to the marina.  It was a fantastic experience negotiating the flight and thanks to Jo and Tim for their company and help.  I think we worked very well together.

I have booked a car for the 15 September on a one way hire and will spend about a week at home before bringing my own car back to the marina.  It seems daft to spend the night in the marina so I travel down a little way and moor at Sells Green - next to the marina managers, who are on a week's holiday!  Into the marina next morning, but that is not the end of my cruising for this year as I intend to have a final cruise down to Bath and maybe Bristol before winterising the boat.